Today I took DovLev to her 2 week sleep away camp here in Israel. Google map has it at 1.25 hours away from Jerusalem, and we did a test drive a few days ago so I could see how it was getting out of the city and getting out to the intercity highways.

All was well for our getting her there by 11 a.m. for check in. We’re then getting her bag triple-checked and we look at the drop off information again. “Campers should arrive between 8-8:30am…”. WHAT!?! That’s a alight difference than our leasurely ‘get up and out by 9 am with time to spare’ plan of attack. Oh well.

Flip forward to 4:30 am the next morning. DovLev had been up since 3 and came in and old us she couldn’t sleep. She came in to make us aware of that fact at 4:30, so I got up with her and we sat on the couch as she made her latest blog post.  At 6 a.m. we got everyone else up (read: RavIma and JediYeled) since they also had to get going by 7:00 a.m. this morning.

We finally left at about 7:30, and we knew we’d be a little late with the camp, but we’re ok with that – we get out of the city, and get onto the highway, and then end up with some old-fashion looky-loo slowing around Tel Aviv where we were stuck in a traffic jam.  We had a good time of it – fighting over ‘good’ music to play (Brittney Spears vs. Weird Al), and DovLev helping me navigate all along the way. 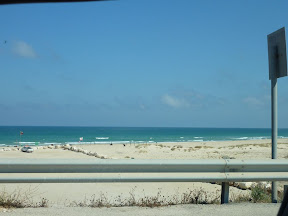 We ended up pulling in around 9:30 ish to the camp which is right on the beach – and the white sand was beautiful!  The heat was impressive as well – they had water at the check-in and insisted that kids and parents each have a drink while signing up.

DovLev’s cabin has all the right mix – one Israeli counselor, one US-transplant counselor (lives in Pittsburgh, goes to school in UCLA), at least one new girl like her and at least one 4-time returning camper giving us her vote of confidence.

After about 5 minutes, DovLev was ready for me to leave, so she pretty much pushed me out and I left her with the camp – we’ll check in with her on Saturday next week for their ‘family day’, unless we get a note from her to stay away…

Next drive: an errand to run for a friend who gave us something to put in our luggage (Shhh! Don’t tell the TSA) as a wedding gift for a family event here in Israel.  Unfortunately all the family contacts were outside of Jerusalem so this was a good opportunity to make the drop-off.  Also unfortunately, the person giving directions didn’t sound very clear on the phone.

Travel note – GPS use in foreign countries – while they are great to find any location you can enter, if the city name is in one language but your keyboard is in another, then you have to keep guessing at the transliteration until you get it right.

Once I finally was able to look up the city, things got better and we met up and made the delivery.  Next stop was back to Jerusalem.  I made it back and took the same wrong-turn that i’ve taken both times coming back into Jerusalem, but made it back ok, but now i’d been driving for 4.5 hours, in unfamiliar surroundings, and i’m exhausted.

I then have a few hours to check-in on work projects, eat lunch, TXT with RavIma and then go out again to pick up JediYeled.  Because the first run went so well (within reason) I decided to drive again to pick him up from camp.

Travel Tip #2: Google Maps works great at home for time estimates when you know the city, not so much for Israel.

The map said 10 minutes, so I left with 20 minutes and right away made a wrong turn that sent me into the city center, where I then got trapped behind a bus stuck making a turn. I waited a few minutes and then decided to go around the bus (the wrong way) and hope the GPS would re-route me.

Travel Tip#3: GPS/Google maps don’t know about the ‘other’ parts of town.

I then realized that the GPS could possibly take me into East Jerusalem if I got too far astray (I was starting to not recognize some parts of my drive), or into some of the older neighborhoods with narrow streets.

And then the police lights showed up behind me.

Travel Tip #4: Police in Israel ALWAYS have their lights running ALL the time, so no, they’re not pulling you over.

After recovering my breath and slowing down my heartbeat, I finally re-navigated around the stuck bus, called my friend and fellow Sabbatical Spouse to let her know i’d be 10 minutes late for pickup of my son and could she please hold onto him for me (how embarassing).

20 minutes later… I show up at camp, and of course, can’t find parking so I stash the car on the side of the street where i’m almost sideswiped by a bus and a backhoe, pick up JediYeled from the very forgiving friend (finding out he’s arranged a playdate for today without me).

We finally get home, vegg out watching some videos and have a nice evening just the two of us (RavIma being at her Study session still for dinner) and we learn how to play Bakugan together over our chicken schnitzel.

Tomorrow marks the first day of just one child and hopefully me spending time geeking out on some of my projects for a few hours.

Oh, and Happy 4th of July, which evidently means something back home…